The story of the Grace app 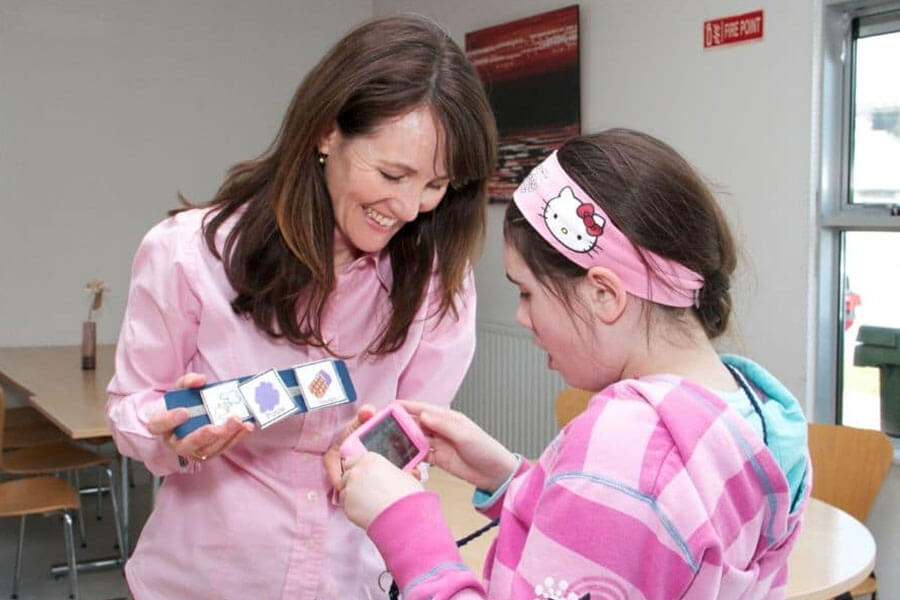 The story of the Grace app

My name is Lisa Domican, and I am an Autism Mum. Both my daughter Grace who turned 20 last month, and my son Liam who will be 22 soon, have autism. Real proper full on autism.

Liam was a beautiful baby born in a hot December in Brisbane in 1997. Even the midwives who delivered him said so and I was often stopped on the street to be told how beautiful he was. He was happy, alert and perfect in my eyes. However, leading up to his second birthday when he still hadn’t started talking, my husband began to question his development. Liam would climb anything, or drag us to the fridge to get something, but he wouldn’t ask for it.

Despite my fears I was firmly in denial at first. It’s important to say it was my husband who convinced me to get a referral from the public health nurse. I willed Liam to stack those blocks and pretend to feed the dolly but he wasn’t remotely interested so it was off to the children’s hospital and a Paediatrician who agreed to see us regularly every few months.

The doctor we were seeing was quite elderly, and kept saying we should give it “more time.” However, by then we knew about waiting lists, and had to demand our diagnosis. This got us into an outreach course and from that, Liam got a place in an autism pre-school class. Even then I was still hoping that maybe he was just delayed. I asked his teacher if there was any doubt and she said, ‘He is very autistic. Very’

By this time, Grace had arrived, 20 months after her brother and delivered by planned c-section at 38 weeks because she was breech and wasn’t interested in turning. A sign of the personality to come!

The day she was born she was put onto my chest, where she stayed for the next two years. Gracie needed to be held tightly all the time or she wouldn’t stop crying. “Born too soon!” I said. I also thought her lack of eye contact was because her brother was autistic, but by the time she was 2 I couldn’t deny it any more. This time we went to a private Paediatrician but it only took one visit. The doctor put a red disc on the blue stacking toy and Gracie went ballistic, until he put it back on the red one. Liam helpfully rearranged his antique surgical instruments in the office. We got our referral same day.
After some major family upheavals, we decided to move to Ireland. My husband is irish and after 12 years in Australia he wanted to be closer to his parents.

Having arrived with two children with Autism in need of early intervention, it took some time for me to navigate the system and get services in place. I eventually found Liam a place in an autism outreach class attached to a mainstream school. The teacher was trained in PECS and very keen to teach Liam as she recognised his interest in books and words. PECS or the Picture Exchange Communication System, works by handing over a picture of something you want to someone who reads the word out loud, then gives you the item. It is naturally rewarding as you get exactly what you want, and Liam was really quick to pick it up. He actually read the word himself and said it aloud when pointing and within 3 months no longer needed the pictures as prompts. At age 4 1/2, he could talk!

For Gracie, it was much harder. At age 3 after I got her into an autism pre-school class, but she was one of three non speaking children in a class of six and the teacher was not specially trained. I was told I had to do it myself.

I approached PECS very methodically, did the two-day course, read the manual, bought the CD and made the pictures, introducing each step to Gracie myself. Gracie picked it up very quickly, but made no attempt to say the words. She had a huge picture vocabulary and could make quite complicated requests using shapes, colours and numbers like: “ I want eight black triangle toast” (Vegemite toast cut into 8) but couldn’t or wouldn’t say “Toast”

I went on more courses, hired home ABA tutors which we paid for with bank loans and persisted with pecs. And I am so glad I did. You see, when Gracie was just six, she began to imitate sounds. One day we were using an animal pop-up book to ask Gracie ‘what do you see?” and she got out her picture strip, pointed to the picture and said “Le-Lion” Another day I was doing torpedo jumps into the pool, as Gracie requested with her pecs. Eventually she got fed up with getting the pictures out and just yelled “I want Mummee Jump!”

It was still difficult for most people to understand her as but Gracie is really smart. If she can tell you don’t know what she’s saying, she grabs her book. Gracie usually gets what she wants!

In 2008, after 5 years on a waiting list, Gracie and Liam got into “Saplings” a full time ABA school. No more supervising home programs and paying for tutors after school. There was now a team of qualified people taking care of my kids’ development and I was free to take on a new challenge.

An idea was born

Around that time, I saw an advert the iPhone on the side of a bus. To me it looked a bit like a Pecs book, the little apps icons like pecs pictures. I wondered if it could be used the same way.

While volunteering at an autism event, I sidled up to the CEO of the phone company, (a major sponsor) and asked her about iPhones. She passed on my request to her staff and they sent me an iPhone. To play with!

I was able to transfer all of our pecs pictures on to an album on the iPhone, and Gracie quickly learned how to open the icon and choose a picture to get what she wanted. We could only use single pictures, as I didn’t know how to make a sequence using “I want” and it is these sentences that prompt correct speech.

Needing and seeking help, I read an article about a gifted young iPhone app developer, Steve Troughton-Smith who was making quite a lot of money creating games. I Facebook stalked him and he agreed to meet to see what I was trying to do.

I brought Gracie’s pecs book, explained the system, then drew a big diagram on the back of a shopping bag. Later that day Steve emailed me a mockup – he got it. I drew the pictures to be used and got a digital artist to convert them, which Steve put into a prototype installed on my phone. Now that we could make sentences, this iPhone came out everywhere with us, and the old pecs book stayed home.

I had been using the iPhone camera to take photos of things Grace liked, saving them in the device album to add to the app. Grace watched me doing this and one day I caught her holding the phone, trying to take a picture of a toy she wanted on eBay. She could have just dragged me to her laptop and pointed to it. But she understood that it if the photo was in the phone, I would know she wanted it. It was a true leap in theory of mind which would never have been possible in a static pecs book.

I told Steve about this and he incorporated the camera into the app so that users could take their own photos.
We were given 4 more phones to install the App on and test with four other children in Gracie’s school and it worked! It was actually Steve who suggested we name it after Gracie as it was her determination that had inspired the creation of the app. And so it was “Grace” that was approved and listed by Apple on iTunes, March 11th 2010.

10 years and 30,000 downloads later Grace 4:0 is available in 8 languages in many countries around the world.

Grace App encourages parents, carers and therapists to connect with the learner and help them learn to communicate independently. While there is an option to use “Tap to Speak” it doesn’t have to replace speech, because Grace App encourages independent vocalisations with images that ensure the user is understood.

Giving non-speaking users the power over their communication has also lead to many families experiencing the joy of shared attention for the first time. When a child takes and adds their own photos it allows a parent or caregiver to get involved in that interest and develop it.

For us special parents it can be puzzle to work out what makes our kids tick, but when they show us what they like, the possibilities are endless.

I also feel very strongly about making communication training accessible for everyone, so the Guide to Grace App is available as a step by step guide to download, along with the Grace App workshop at Education Nation for schools and CATTS online training. Training can be completed in your own time with a certificate towards CPDs.

Grace App supports other communication goals such as asking for help or saying when something hurts. So much of what people perceive as “inappropriate behaviour” is just difficulty with expressing important needs. Our autistic loved ones deserve to have long comfortable and happy lives. Getting help when you need it is part of that.

In my role as a communications advocate I have won many awards, however the best reward has been my daughter’s developing independence and interaction with me. If I can bring that to as many other parents and care-givers as possible, then this journey has been very worthwhile.