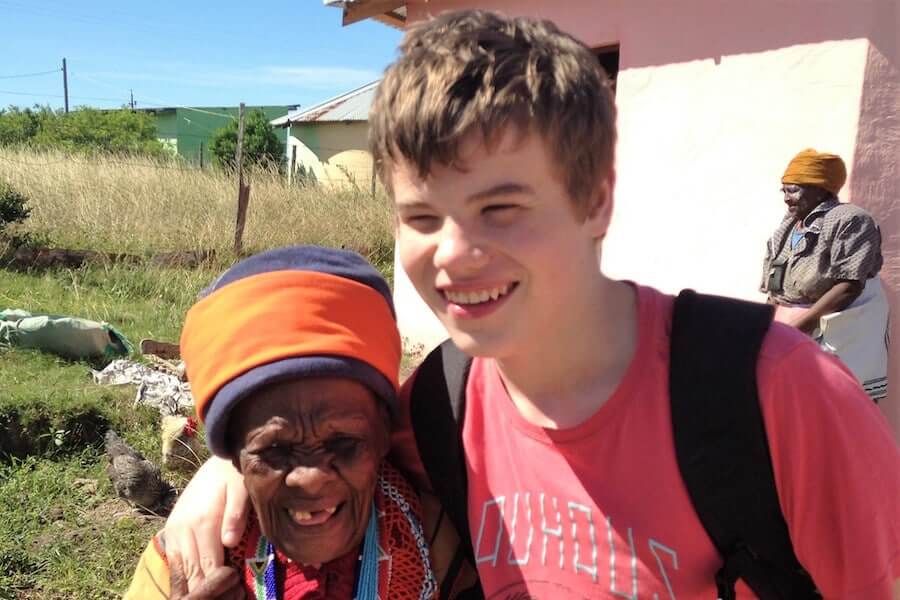 Dr James Best lives in Sydney with his wife, Benison, and three sons. His youngest son, Sam, was diagnosed with ASD, aged 3, in 2004.  Sam’s Best Shot is his new book about a father and son’s life changing journey through autism, adolescence and Africa.

You can pre-order the book here: https://www.booktopia.com.au/sam-s-best-shot-james-best/prod9781760113148.html?source=pla&gclid=CIqb7Zjej9UCFVEKKgodBrEDSg

What the hell were you thinking!?

Actually, we got asked that a lot when we first started telling people about the trip, which really took us by surprise. We just felt it was a natural extension of what we had been doing for years, which is exposing Sam to experience and challenge as much as possible, so as to give him the opportunity to learn as much as he could about how to handle the big, wide world.

What was your motivation to take this trip with Sam?

Our motivation to take this trip was pure and simple; we just wanted to help Sam. There hasn’t been a trip of this type that has been scientifically evaluated, so we couldn’t really say it was based on science, which kind of went against the grain for Benison and myself, given we both have scientific backgrounds. However, the idea was based on our best understanding about how people with autism learn, and also what we know about how the adolescent brain develops. In studying the trip through researchers at Griffith University, we hope that our experience might help others understand a bit better about what opportunities there are to help adolescents with autism.

What were some of the biggest challenges about travelling with Sam?

The biggest challenge, especially in the first half of the trip, was how difficult Sam was finding being away from his normal environment, particularly having limited access to the internet. It actually ended up dominating the first few months, and I had to develop strategies on the run to try and overcome his distress. We started scoring his performance each day, with the reward of a possible early end to the trip if he performed well. However, as time went on, his confidence seemed to grow, and he started to realise he could actually handle many of the challenges he was being set, including the limited internet access.

The other concern from a practical point of view was not getting separated. There was a couple of occasions where I did lose him for a short period of time, which freaked me out, but it worked out ok. As for much of the other stuff, us both getting lost, dealing with different accents and cultures, the chaos of Africa, well, that was all part of the learning experience. Oh yes, and the mosquitoes. They were really bad!

What surprised you the most throughout your travels?

There were lots of surprises, which was kind of the idea, I suppose. I think one of the big surprises was how relaxed and happy the Africans were. There was a lot of time to interact and joke around with us and with each other. Another surprise how the Africans interacted with Sam. It seems disability is very accepted in Africa, possibly because there is so much disability in the developing world. They really were very interested in him and inclusive in their approach with him.

Without spoiling the book for anyone, what has been the biggest benefit of the trip for your family?

There were some surprising benefits of the trip that we didn’t expect or plan on. I suppose the best way to put it is we are confident that Sam’s quality of life is likely to benefit from what we did in Africa.

Were you scared to travel to Africa?

Not really. I got used to it after a while. The most dangerous thing I saw was the hippos but we were on boats so it was ok. But the worst thing was being robbed. I got abused a bit, but at least I didn’t bleed. I did get sick in Uganda which was a bit scary. I could have died but I got better. It would have been a lot better if I was in Sydney because Uganda doesn’t have very good health systems compared to Australia.

The best part of the trip was white water rafting which was like Quidditch, but on water. Other things I liked were going to McDonald’s in South Africa, and seeing Dad’s friend Matt Rickard in Tanzania. I really liked the lions, especially the male ones because they look cave-man-like.

What did you like the most about travelling with your dad?

It was tiring but it was useful. Dad helped me learn some life skills.

What did you miss the most about home?

I missed my stuff, especially my VHS tapes. I also missed my Mum, and also my brothers a bit.

Would you like to do more travelling, if so, where?

I will consider travelling later, maybe by myself. Maybe to Japan because they have lots of gaming, or maybe to America to see lots of shopping malls.