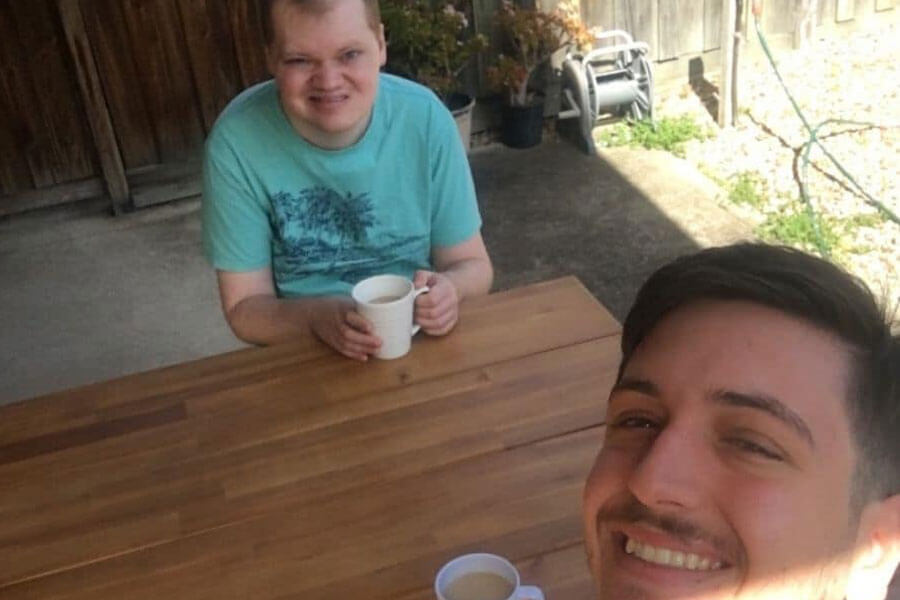 Mardi and her son, Eric (22) live in Melbourne. Up until a few months ago, Eric, who is living with ASD, stayed inside “24 hours a day”, never leaving his room in the assisted living facility in which he lives.

The support workers provided through traditional providers were unable to connect with Eric on a personal level.

They were often much older and did not share any of his interests. Because of this, despite having sought support from a number of traditional providers and having tried numerous programs for her son, none were successful in supporting Eric to leave his room or engage with the outside world.

Due to their lack of success going down traditional routes, Mardi was looking for a better alternative.  When she came across Mable.com.au, a safeguarded platform where people can take control of the support they receive by connecting directly with support workers in their area, Mardi decided that there was no harm in “giving Mable a go”.

Mardi posted up a job ad looking for the right support worker for Eric. Before receiving a response to her job posting, she decided to look through some of the profiles of the support workers on the platform, and came across the profile of Lucas, a young man who was around the same age as her son. Lucas had considerable experience working with people with ASD. She was impressed with both his industry experience and range of interests, which, like Eric, included a love of sport.  She instantly had the feeling that Lucas would be a great match for Eric. She says that she “hoped that he would respond to her job posting”.

Mardi saw an instant change in her son upon meeting Lucas, saying: “I don’t know what Lucas has, but the connection was immediate”. Their shared love of sports helped them form a common ground on which to connect. The change in Eric was massive – on the first day of working with Eric, “Lucas had him out of his bedroom and outside kicking a ball around the backyard”.

On their first day of meeting, Lucas also made lunch with Eric. The two ate together outside. This was a momentous event, with Eric having not eaten outside of his bedroom for “years”.

Lucas is not the only independent support worker that Eric now receives support from. Sue, a former manager of a program that Eric previously attended, is also working with Eric 2 days a week, teaching him useful life skills such as how to cook. Taking control of the support workers for her son has been useful for both Mardi and Eric, with Mardi saying that she can “easily move hours around to what suits mine and my son’s schedule”.

Mardi says that the connection Lucas and Eric have formed has been invaluable and has made a huge impact on Eric. Connecting with Lucas and building a bond has led to a massive improvement, with Mardi telling us that her “boy is wearing his beautiful smile again”. Beyond playing sport together, Lucas is also teaching Eric useful and interesting life skills – at the moment Lucas is teaching Eric how to write the alphabet. Lucas now sees Eric several times a week, with Eric looking forward to seeing Lucas so the two can play some sport and hang out together.