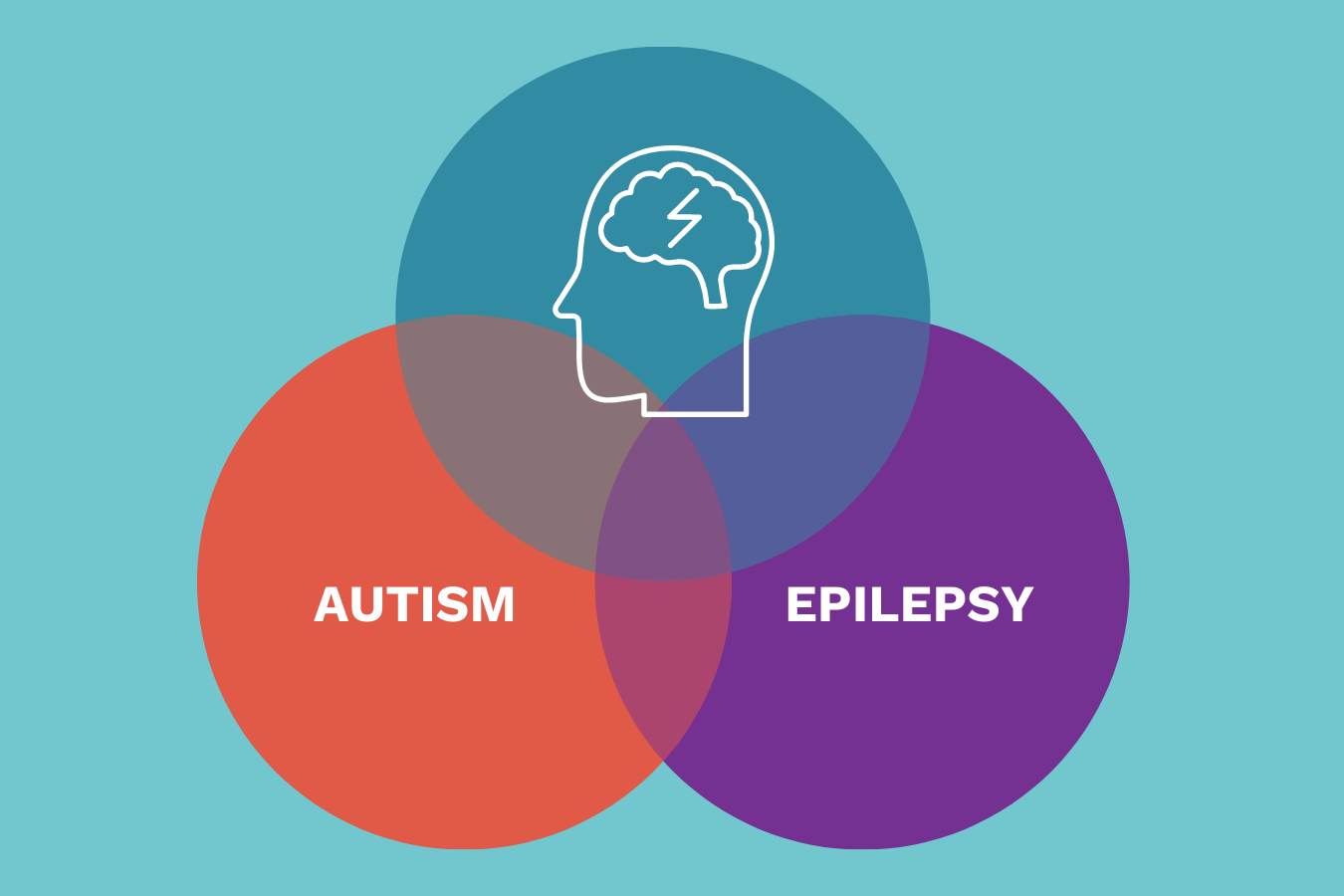 Epilepsy and autism are both relatively common conditions of the brain and frequently exist together. Researchers are seeing increasing evidence of a link between these conditions.

There is no plausible reason for autism causing epilepsy, however, the co-occurrence of autism and epilepsy is almost certainly because of underlying factors predisposing the person to both conditions, including both genetic and environmental factors.

Figures differ greatly for the combination of both conditions, but data from a review of multiple studies showed that:

Someone with epilepsy is almost 10 times more likely to be diagnosed with autism than someone in the general population.[vii]

While a connection between the two exists, how they influence each other has yet to be established.

Conditions such as attention deficit hyperactivity disorder, anxiety and sleep disorders are also common in both people with epilepsy and autism.

There is no doubt some of the features seen with seizures and autism can overlap.  Behaviours or movements seen in some seizures can look like some features of autism, and vice versa, sometimes making it difficult to distinguish between the two.

Overlapping features such as episodic, repetitive behaviours, staring episodes, motor tics and stereotyped movements can be seen in both diagnoses and if they are present, can make it difficult to make a distinction between the subtle signs of seizures and the characteristics of autism. This can make diagnosis challenging.

Even so, it is important to establish if these features are seizures, or other neurological events because it is necessary to treat seizures appropriately. EEG’s can sometimes help capture abnormal electrical activity and assist with the correct diagnosis.

What might explain this overlap between autism and epilepsy? [ix]

One theory for the overlap is that the conditions share common biological mechanisms.

Does one condition cause the other?[i]

From the current evidence, it appears that epilepsy is rarely the cause of features seen in people with autism, although poorly controlled or inadequately treated seizures can cause these features. This can occur in some epilepsy syndromes such as Landau Kleffner, Dravet Syndrome, West Syndrome and Electrical Status Epilepticus of Slow-Wave Sleep (ESES), so it is important to treat seizures promptly and effectively. One challenge in people with autism is to determine why early childhood regression occurs in perhaps 25% of children. Whether epilepsy plays a role in the regression of this subgroup of children with autism who lose skills remains to be determined.

There is no plausible argument for suggesting that autism could cause epilepsy.

It seems that the weight of evidence now favours a common underlying cause for both conditions.

The co-occurrence of autism spectrum disorder and epilepsy is almost certainly the result of underlying factors predisposing to both conditions, including both genetic and environmental factors.

In people with autism and epilepsy, almost half have a genetic cause.

Genetic testing is very important for epilepsy and autism spectrum disorder because it may be helpful for clinicians to determine appropriate management and interventions, treatment, and prognosis.[x]

Having a greater understanding of the relationship between these two conditions could have significant effects on their management. If the risk factors for developing epilepsy in people with autism were better understood, perhaps the epilepsy could be prevented in this group, or at least recognised early and managed better, as a result. Good management of autism, epilepsy and comorbidities can greatly improve the quality of life of both the affected person and the family.

Someone on the autism spectrum will have symptoms such as: [xii]

Children and adults with autism have difficulty with verbal and non-verbal communication. For example, they may not understand or appropriately use:

Additional social challenges can include difficulty with:

Restricted and repetitive behaviours vary greatly across the autism spectrum. They can include:

The assessment is done by specialists in the field, and it is quite comprehensive and lengthy but waiting times can be very long for a formal autism assessment, so it is best to speak to someone early if you have concerns.

Tips for when you speak to someone

At the end of the assessment, a lengthy report will be drafted to confirm the diagnosis of autism spectrum disorder or other possible diagnoses.

How a diagnosis can help

For parents and children, a diagnosis can help you:

For adults, a diagnosis can help you:

Doctors and caregivers of people with autism should look for the following “red flags” as signs that the person may be having a seizure:

Poorly controlled or untreated seizures may affect a person’s:

Anyone who has symptoms of seizures should see a neurologist. A correct diagnosis and treatment may help control the brain activity and prevent seizures.[xiii]