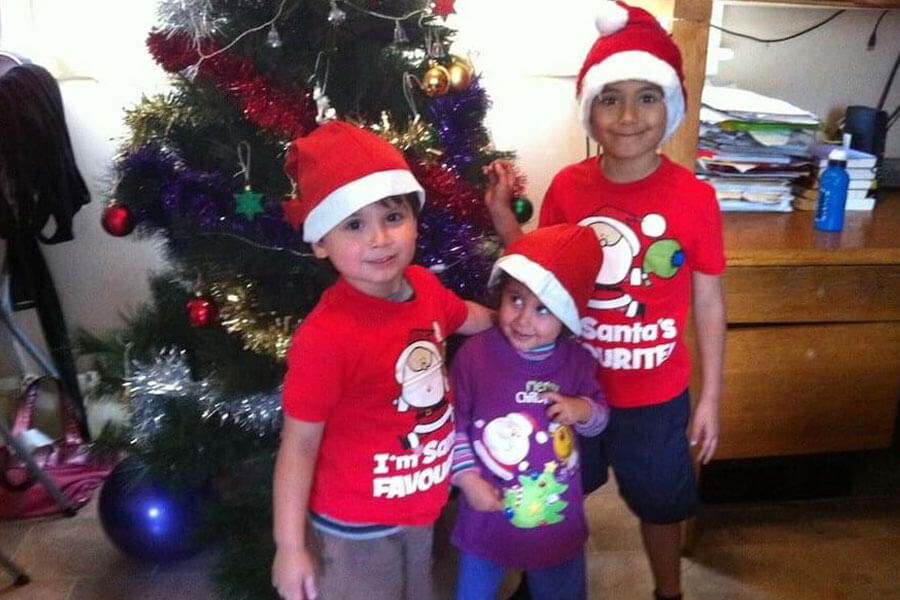 It’s all in the planning

For most children, Christmas is a time of fun and joy and laughter. For my son Giovanni, 10, it’s fraught.

Noise and food pretty much define Christmas in my big, Italian family, so getting Giovanni through the day intact (no meltdowns, reasonably happy, fed) is always challenging.

It took me a while to realise how triggering Christmas and other celebrations could be for my son. He’s never enjoyed birthday parties (the few he has been invited to over the years) and eats so few foods keeping him nourished outside of home can be impossible.

Giovanni wasn’t officially diagnosed with Autism Spectrum Disorder (ASD) until he was seven, so before then it was a case of the blind leading the blind. I could only guess and what would upset him and why, and was constantly trying to repair any damage done, giving little thought to the many, many things I could do beforehand to ensure he managed to enjoy himself just a little at family celebrations.

Over the years and thanks to hundreds of hours of occupational therapy, Giovanni and I have learned how to look after him on such occasions.

We learned how to take care of him together.

On my part, I have to try and predict challenges ahead and try and figure out ways to lessen the negative impacts on my son.

On Giovanni’s part, he needed to learn how to communicate with me effectively – what is upsetting him and why, what he needs to make it better.

We are a team, and at events such as Christmas, my other children Philip, 14, and Caterina, 9, have learned that I’ll most likely be focused on Giovanni.

Thankfully they have gotten pretty good at taking care of themselves at family gatherings, and my family know enough to step in and take care of my ‘other children’ while I triage the one that needs me most at those times – my beautiful Giovanni.

Looking after Giovanni at such events involves some pre-planning. That means we have to bring along ‘comfort items’ such as his iPad and teddy bear so he can focus on them instead of the chaos surrounding him as the nine children in our immediate family tear into Christmas gifts.

It’s important that Giovanni knows what is happening and when, and this is a conversation we have to have more than once. In fact when it comes to such events, I tend to mention them every time the topic of Christmas comes up, a couple of weeks before, the week before, the night before and the morning of.

My mum knows some of the foods Giovanni likes to eat but we often get it wrong. Pasta in the wrong shape, or the bread rolls he likes being cut in half so he won’t touch them. He’s extra fussy when it comes to dessert. So we bring foods along with us just in case he doesn’t want to eat the foods being served for whatever reason.

Talking to my family about Giovanni’s needs ahead of events became a very important part of the process, but it wasn’t an easy one. I needed them to really HEAR me when I told them of his likes and dislikes, trying to carefully explain why he needed things to be a certain way. I’d also explain that I didn’t expect them to take responsibility for any of this, that it was just a ‘heads up’, and to just let me do what I needed to do to ensure Giovanni was happy during the event in question.

This is the part where I tell you it’s okay to lovingly hover, sometimes at a distance. This is particularly important when we are opening gifts. Giovanni doesn’t know what to do with a pile of presents. It’s too much for him to cope with. So we navigate it together. The room can be bursting with noise and confusion but I’m right there next to him calmly leading him through the process of opening each gift one-by-one, quietly reminding him that he needs to say thank you for each and every one, even if he doesn’t like them.

When Giovanni needs some quiet time, he gets it. I never expect him to go beyond his abilities by sitting quietly at the table while everyone finishes eating. Having him eat his food with us for even a short amount of time is enough. This can be difficult when there are different rules for neuro-typical kids and different parenting styles, but Giovanni needs what he needs, and it’s my job to make sure he gets it. My parenting choices for Giovanni need to be respected as much as those for the other kids are.

It always helps to talk about how things went afterwards, but not until much later that evening or the next day. Giovanni and I will discuss what worked, what didn’t, different ideas for tackling scenarios and how I can help more. The end goal of this is to not only help educate myself and my family on what Giovanni needs, but to also help Giovanni learn self-care. He’s not very good at it yet but is much, much better, and I think that’s because he knows when he is with my family he is in a safe space, and his needs will be catered to as much as possible. At the end of the day, we want him to enjoy Christmas as much as possible. Whatever he needs.

Giovanni isn’t going to jump for joy when he opens Christmas gifts, even if he loves them. He may announce if he hates them however, and often when we arrive home won’t touch any of them for days. They are new items in his ‘safe world’ at home and he often needs time to get used to them even existing in his room before he begins to look at them. When it comes to Giovanni, he may not even say ‘thank you’. We’ve all learned that when it comes to Giovanni, the payoff is delayed, and subtle. Instead of a ‘thank you’, you’ll see his face light up as he plays with something you have bought him. That’s all the thanks I need from him. His smile is everything to me.