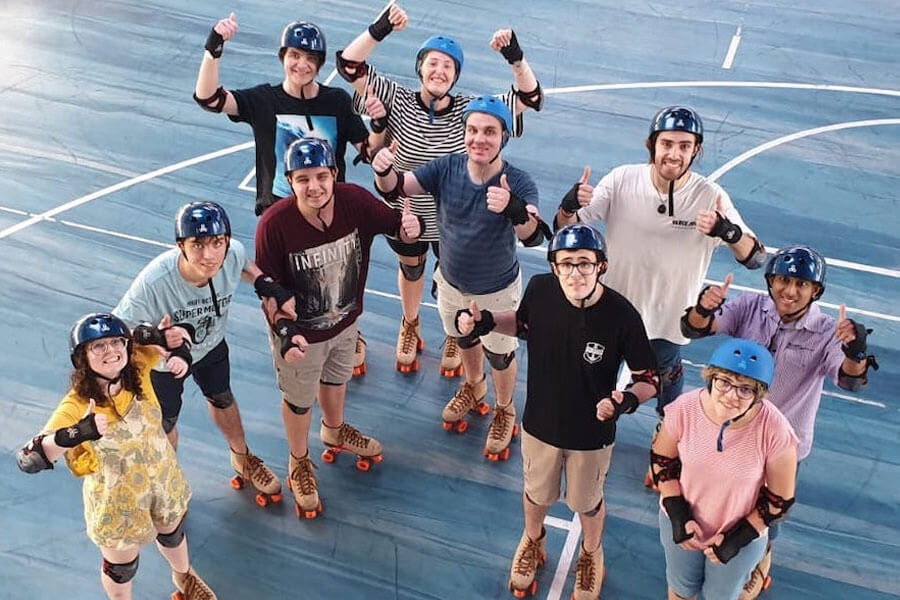 Part Two of our adventure on the high seas with the crew from Chill Ahoy… Missed Part One? Catch up here first!

We woke on day two of our adventure with the sun rising over the starboard bow and the ship cruising at 20 knots. Be prepared to read more nautical terms as Michael completed a Cert 2 in Coastal Navigation twenty years ago and keeps sharing his ‘expert’ knowledge with me unsolicited.

Breakfast was scheduled for 8:00am back in Windjammers, scene of the NCIS restaurant incident of the night before. But the What’s App messages were buzzing around by 7:15 that the team were starving and eager to eat and plan activities for our first day at sea. Some of our Chillies needed extra support with their independent living skills while others were quite independent from the first day. The mentors hit the decks early armed with care plans and sunscreen and collected their respective peer groups from their cabins and made their way to the restaurant.

Each morning at Windjammers we were greeted by the same host who was fondly known as washie washie. This was his mantra as director of restaurant hygiene as he ushered us through the washroom to perform a 3-minute surgical scrub before entering the restaurant. The Chillies and mentors would chant washie washie in the same sing-song voice on arrival each morning.  James was particularly thrilled with the routine and rules of washie washie so much so that one morning he stopped some passengers who were avoiding the wash room with a high pitched washie washie! to keep them on track.

At a series of family meetings back at Chill HQ prior to the trip, we had briefed the Chillies on the structure of each day of the cruise. We would meet at breakfast and in their 3-4 person mentors peer groups and plan a schedule of activities for the day ahead. I had copied the ship’s activity list from the cruise company website and prepared laminated daily activity sheets so that peer groups could negotiate and highlight a list of activities for each day of the cruise. The ship provided a quasi-independent living environment that was structured and safe and also provided a platform for these young adults to practise a range of independent living skills.

Ovation of the Seas was a floating amusement park with a games arcade, roller skating rink, a dodgeball and basketball court, dodgem cars, a running track, 4 gyms, a wave rider, parachute tube, rock climbing wall, 10 swimming pools with the largest also functioning as a floating outdoor cinema. I forgot to mention a robot bar, 4 theatres, 12 retail shops and a casino, where our son Connor and a fellow Chillie booked themselves in for the Blackjack Masterclass with a $50 minimum!!!!

The 5 mentor groups scattered after breakfast to various activity destinations with the plan to meet up again at lunch and plan the afternoon and evening sessions. This was our intended daily rhythm for the next 7 days. Some groups went swimming, some joined the wave riders and the rest cobbled together busy schedules from one end of the ship to the other.

On day two of the cruise, the ship hosted a poolside competition for “Sexiest Man Alive”. There were at least 1,000 spectators around the pool and 3 finalists, one of them a Chillie!!!!

Weighing in at 50kg, Damien joined his fellow contestants to impress three female judges, drawn from the 5,000 passengers aboard the ship. The 3 women (aged approximately 20, 50 and 90 respectively) were seated formally on stools at poolside and the 3 finalists were required to show their best dance move, their best joke and then had to answer the mystery question which was “If you were a fruit, what fruit would you be?” Damien’s fellow finalists prepared dance moves and cheeky jokes. What they weren’t prepared for was Damien. His moves lit up the top deck of the ship, his joke left them rolling, and when asked the final fruit questions he said he would be a mango. When asked why a mango by the competition host he replied, ‘Because I’m sweet and juicy on the inside!’. The crowd went ballistic and Damien became a cruise ship celebrity when he won Sexiest Man Alive on day 2 of our adventure.

Day 2 rolled into day 3 with the smorgasbord of daily activities punctuated by the actual smorgasbord of bistros, pizza bars and hot dog vans (did I mentioned that there was a hot dog van?). The most noticeable change in our first few days at sea was how quickly the laminated individualised independent living skills prompt sheets (that sat prominently on bathroom mirrors) faded.  Checklists morphed into conversations, negotiations and self-determination to be independent. Should we go to the dodgem cars before a swim and then play foosball?  Which show will we see tonight?  What will we have for lunch?  Is dinner booked?  Which restaurant?  Is it formal or casual?  Can we snorkel on Mystery Island tomorrow?  I was astounded at how well every Chillie could find their way around the ship, how well they read the ship directories and maps.  Our team de-briefs (at rest time around 4pm) buzzed with mentors praising their Chillies like Harry was ready early this morning and didn’t use his prompt sheet for teeth or putting dirty clothes in his laundry bag!  Another mentor commented, Sean asked if he could make his own way to breakfast rather than me collecting him from his cabin!  Our senior mentor reported George told me he didn’t need help with his medication at all!

The mentor’s roles were evolving from cruise activities directors to fellow travellers and by the time we docked in Noumea on day 4 of the cruise an easy calm had descended over the Chill Ahoy team. It was quiet… too damn quiet. But a day on shore in a non-English speaking country with no local currency and the largest flea market in the south pacific would fix that.