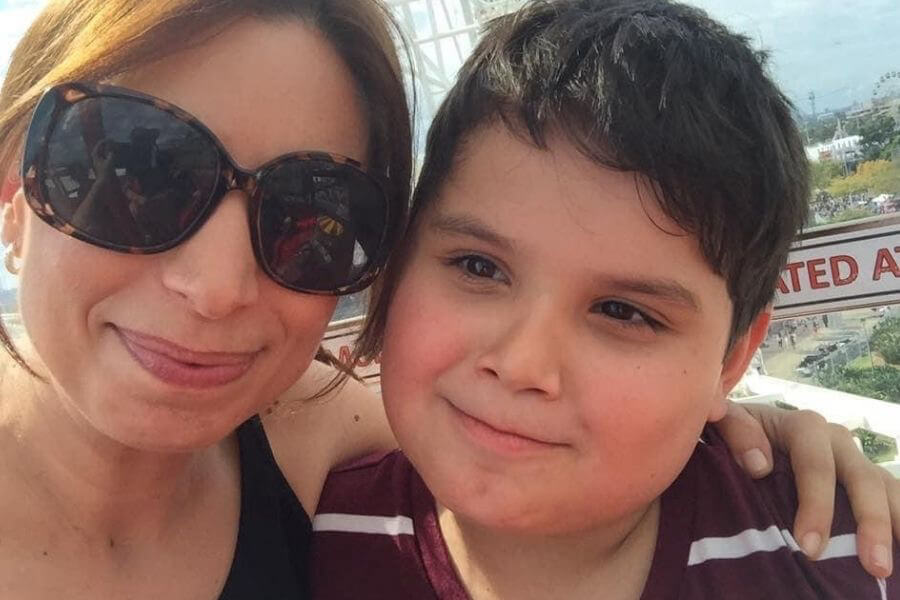 Last year it was a blinding sand storm. This year it was a massive tsunami. But the theme is always the same. My son Giovanni and I are walking together and a natural disaster, over which I have zero control, comes and sweeps him away from me as I desperately try to hang onto him.

These are the nightmares that plague me at the beginning of the school year as my autism mum brain kicks into overdrive ahead of what I know will be a huge challenge for my baby boy.

But this year is particularly challenging for us both.

Giovanni has just turned 13 and is beginning high school in a matter of days. He has been placed in an incredible support unit at an excellent school. On paper, everything is in place for him to have a brilliant year. But that’s what I thought last year when I made the decision to put him back into a support unit after a placement in a mainstream public school didn’t meet his needs.

On the first day at his new school, Giovanni was physically assaulted by two of the teachers and they later denied it so we walked out, never to return. His mainstream school agreed to take him back for the remainder of Year 6. It was the best choice because Giovanni’s and my trust had been broken in the most hideous way and we both needed a year to recover.

None of the schools Giovanni has attended has met every single one of his needs but he has never been physically assaulted before.

Staff at his mainstream school and I became even more determined to protect him going forward and managed to secure him a place in school that would keep him safe and do its best to meet all of his needs.

But the sand storm, the tsunami and all the other nightmares I have at this time of the year serve as a reminder that I will never be able to control everything about my little boy’s life and that despite incidents in the past, he and I are going to have to take a leap of faith that this time it will be better.

We’ve had more good experiences than bad when it comes to schools.

There was the Catholic primary school that bent over backwards to cater to his emerging needs. His teachers taking it upon themselves to complete autism training so they could help him as much as possible. But at the end of the day weren’t able to meet his needs or protect him from bullies on the playground.

There was the support unit that brought out the best in him academically, especially when it comes to Maths. Yet they were so far away from where we lived and we were overly reliant on government drivers to get him to and from school – a strict and unforgiving program, and they failed to address his social needs.

Then there was the mainstream school where we met the most incredible teachers and educators who loved Giovanni just as much as I did but weren’t able to cut through the government red tape that would allow them to put in place the full-time support Giovanni needed, despite the reams of paperwork we filled out together and the medical reports we prepared?.

Then there was the school where we lasted just one day after he was physically assaulted. That school had a stellar reputation when it came to teaching special needs children but I later found out Giovanni was part of a new class that had been hastily thrown together due to growing demand and the teachers were inexperienced and overwhelmed that first day.

I could have forgiven the physical assault – which Giovanni said involved two separate teachers trying to physically drag him into the classroom – but it was their blatant lying about it that I couldn’t work with.

Then back to mainstream where they pulled out all the stops for us and tears were shed at the end of his time there.

As expected, Giovanni was too overwhelmed at orientation to make it into his actual classroom and he was a bit emotional when I picked him up, but just because he was there in a new environment for so long.

When he told me that he sat outside all day and different teachers took turns sitting with him, never laying a finger on him, I knew it was going to be okay.

I can already see it isn’t a perfect school. Their special needs uniform fitting day was a disorganised mess, the school was a mess, his actual classroom hadn’t yet been built by the time orientation took place and their focus on children in the support unit wearing the correct uniform each day seems silly.

But he told me he felt safe there and the teacher who oversees the support units said Giovanni is welcome to kick off his school shoes as soon as he sits down each day which means they get it.

I can’t wait to see him thrive in a safe, supportive environment. I can’t wait until they see him do Maths, most of it in his head like a human calculator. Wait until they get to know his dry sense of humour. He doesn’t smile, he beams. And despite his social deficits, some kids always gravitate towards him, happy to sit with him while he seemingly ignores them.

It is going to take a good six months for him to fully transition into high school, until I can just drop him off at the drop-off point for the support unit kids and drive off.

That first six months, however, is going to be hard.

I’ve taken time off work to kick start his transition. We’ll practice wearing his uniform at home, packing and unpacking his school bag, driving past the school and talking about how he is feeling, visiting the empty classroom to set up his desk, visiting his desk while the classroom is still empty.

There will be anxiety and meltdowns and sleepless nights on both our parts. There will be school refusal and there will be household items such as his shoes and favourite toys thrown.

He may kick a wall or two.

But we will get there, together. And it will be worth it.

To all the special needs parents coping with similar experiences at the beginning of the school year, I want to send you so much love. If it weren’t for the support of my fellow special needs parents on platforms like Facebook and through organisations like Kindship, I don’t know how I’d cope.

We’ve got this, because we have to. There is nobody else who can do it except us. There will be highs and lows but it will be worth it for that day when our kids happily walk to class and drop comments about fun things they have done and friends they have made.