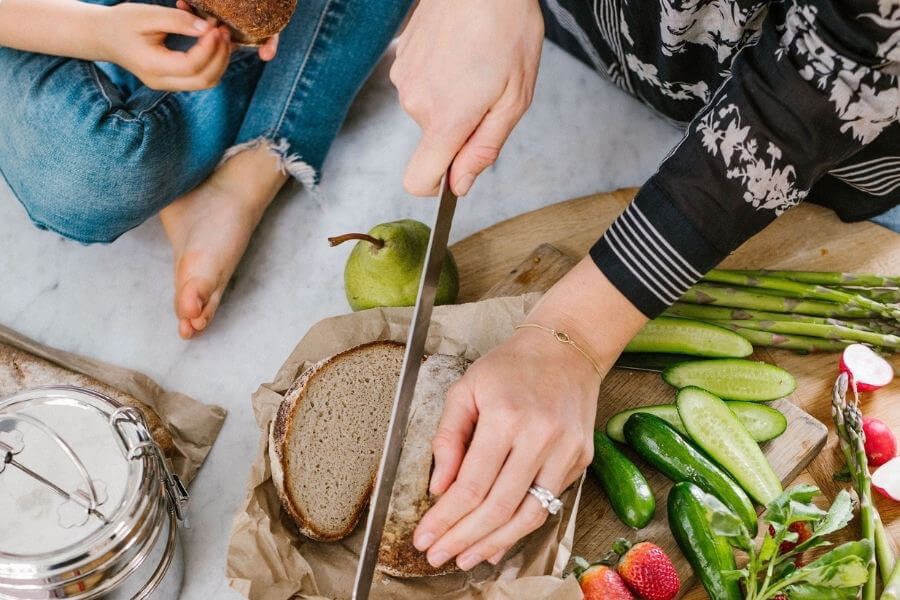 Adopting a gluten and casein-free (GFCF) diet to help manage behaviours and symptoms associated with Autism Spectrum Disorder (ASD) has gained much attention over the last decade or so alongside meaningful research into the role of the gastrointestinal system and microbiome. It sometimes seems that no matter which condition you present Dr. Google with, a gluten-and dairy-free diet is touted as a cure-all, but does scientific evidence support this dietary approach in ASD?

What is Gluten and Casein?

Gluten is a protein found in grains like wheat, rye and barley. Gluten can also be added to foods to give it that delicious fluffy texture. The proposed “problematic” compound with dairy is the casein, a protein found in cows, sheep’s and goats’ products like milk, cheese and yogurt. There is some evidence suggesting that A2 casein is less problematic than regular dairy that contains both A1 and A2 casein for some individuals. Both gluten and casein proteins when ingested need to be properly broken down into single amino acids but it seems some individuals are only able to digest them to peptides (smaller amino acid chains).

Theories Against Gluten and Casein in Autism

Many people with ASD present with increased gastrointestinal symptoms and disorders.

One theory examined is that these often-undiagnosed gastric conditions and food intolerances may provoke externalising behaviours and inattention to tasks due to undiagnosed pain. This means that sometimes eliminating gluten and casein from the diet may have a beneficial effect by alleviating these gastrointestinal symptoms.

Another theory behind the benefits of a gluten-free casein-free diet for autism is that these proteins can cause inflammation and damage to the intestinal tract. The inflammation, in turn, may cause nutrient absorption issues, as well as intestinal hyperpermeability or ‘leaky gut’.

Inflammation has been shown to be systemic not just in the gut, with another study showing children with ASD exhibiting higher pro-inflammatory cytokines after consuming foods containing gluten, casein, or soy when compared to unaffected control groups. This finding has sparked researchers to look further into the link between food allergies and ASD. A meta-analysis of pro-inflammatory cytokines in autism spectrum disorderssuggests that a dysregulation of the cytokine system is at the core of immunopathogenesis of ASD.

The enzyme needed to digest gluten and casein is not made by humans but by gut bacteria called enterococci faeceum. Scientists in Australia studied the stool bacteria in children on the autism spectrum and found that these enterococci bacteria were not present in the gut of children with ASD. This could mean that gluten and casein are not properly broken down into amino acids but rather they remain as peptides (small chains of amino acids).

As a result of “leak gut”, these gluten and casein peptides, can leave the gut and enter the central nervous system and bypass the blood brain barrier. There peptides have been termed “opioid peptides” because of their affinity for the opioid receptors in the brain. They have effects are similar to morphine, resulting in a high pain threshold, an altered mental state (dreamy), constipation and addiction to the substance (ie bread and milk).

It seems there are multiple mechanisms potentially involved in the gut of children with ASD; gut irritation and gastrointestinal symptoms provoked by gluten and casein, gut inflammation leading to increased intestinal permeability, absences of certain gut bacteria species, the insufficient breakdown of gluten and casein peptides and ultimately systemic proinflammatory cytokines increase and the circulation of “opioid peptides”.

What Does the Scientific Evidence Say?

Although there are now numerous studies investigating the efficacy of a GFCF diet for reducing behavioural issues in children with autism, unfortunately, the data is still, on the whole, inconclusive.

Nutrition studies are notoriously hard to run, and gaining a definitive result is highly challenging. The studies that have explored the effect of the GFCF diet in autism have faced numerous challenges: low participant rates, low adherence rates (some of the study participants were even caught stealing food from their siblings!), difficulty in blinding the participants to which diet they were on (leading to bias), as well as poor ASD diagnosis characterisation.

One very recent systematic review and meta-analysis (the highest level of scientific evidence) drew together the results from six randomised controlled trials examining the effect of the GFCF diet on children and adolescents with ASD. They concluded “no benefit from following the GFCF diet for ASD symptoms, parent-reported functional levels, or behavioural difficulties.” A critical observation gained in this review was an increase in gastrointestinal issues in those who were on the GFCF diet. Importantly, despite the researcher’s best efforts, the six studies included in this meta-analysis were deemed ‘low – very low quality of evidence, due to “serious risk of bias, serious risk of inconsistency, and serious risk of imprecision.”

These difficulties in conducting high-quality research make it very difficult for studies to arrive at a statistically significant conclusion regarding the GFCF diet’s use to improve symptoms of ASD.

The lack of scientific evidence on the effects of diet on autism does not, however, mean the GFCF diet won’t work for some children with ASD. Interestingly, multiple case studies report great success after adherence to this diet, and some even claim complete remission from ASD.

One review on the use of GFCF diets in autism examined five individual case studies. Four of these cases reported positive changes in cognitive, behavioural, and language symptoms of children with ASD. Three of the five cases reported significant improvements in communication skills and cognitive scores after following the GFCF diet that their child no longer met the diagnostic criteria for ASD. It is also notable that the four cases that did show improvements in ASD-related symptoms were also the four that exhibited pre-existing gastrointestinal symptoms before commencing the diet. These case studies support the need for more detailed research for particular subsets (such as children with ASD who have gastrointestinal symptoms) and their reaction to the GFCF diet.

Considerations When Following a GFCF Diet

It is important to note that following a strict GFCF diet for a child with ASD can add unwanted stress to a potentially already stressful family dynamic. The GFCF diet also forces a certain level of restriction, which may not be nutritionally desirable if the child’s diet is already self-restricted, as is often the case in ASD. Other potential reported considerations for following the GFCF diet include increased gastrointestinal discomfort, increased night waking, decreased appetite, and weight loss.